Most of us have been wearing shoes for almost everyday of our lives. Unfortunately, most of us don’t know how to take care of our feet once we take them out of those shoes. Luckily, we have made a short video to help you learn some various ways to take better care of your feet, inside and outside your shoes. Join Jenna Applegarth, Founder & CEO,on a fun foot care tutorial! 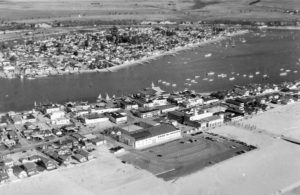 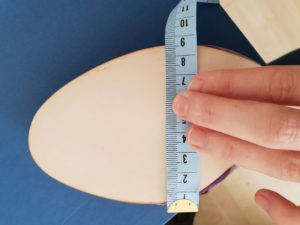 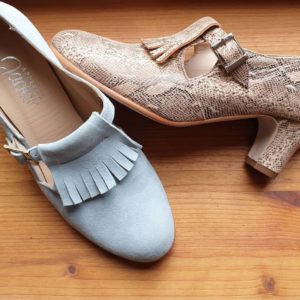 So you just bought a brand new pair of shoes, congratulations!
Here are some tips of the trade to help make sure you keep your feet happy and your shoes looking top notch!

1) Wear them around the house in small increments. This will help your feet to get used to the shoes, and for the shoes to begin to adapt to your feet
2) If you need to adjust their sizing (max 1/2 a size), you can take them to a cobbler to be professionally stretched. You can also try some various home tricks such as wearing them with thick socks, aiming a blow drying at them, filling them with ziploc bags full of water then placing them in the freezer
3) Use a small wire brush, or tweezers or flat razor to remove any build up, rocks or gunk from the soles
4) Always let your shoes air dry – drying too fast can cause the leather to crack
5) Dryer sheets, newspaper, shoe balls, these all help to not only lower the moisture build up, but also with reducing smell
6) Try to prevent the heels (of any shoe) from scratching the uppers. Shoe bags, wrapping them up and being aware while wearing them help with this
7) You can write your name on the inside or the sole so as not to mix up your shoes with someone else’s
8) If you feel any rubbing – you should put on a bandaid, mole skin or blister aid right away to prevent blisters
9) If you find any scratches on your shoes, you can treat them with leather dye or, find a matching nail polish for small touch ups
10) If you prefer wearing socks but don’t want them to stand out, you can check out Gekks, they even work in heels
11) If you want to soften up your shoes, invest in a quality leather oil/moisturizer. Always try it on a small area first to avoid discoloration.

Go forth and enjoy your Applejacks Shoes!

Seneca Village, NYC – the largest and most significant area of Afro-American property owners in 19th century USA. Demolished to clear space for Central Park, and almost forgotten about to our modern day society. This neighborhood represented prosperity, opportunity and home for hundreds of people. Please, take some time to go read about this neighborhood in more detail here : http://www.centralparknyc.org/things-to-see-and-do/attractions/seneca-village-site.html

Our Seneca Heel is our first model, setting the tone for all that is to come. With it, we embrace our own hopes, prosperity and our new home in the shoe industry.

It has a 5cm heel, a cushioned insole and comes in 3 color combination options: Purple, Rose Gold/Silver, Red/Cream. The Purple come with dual layer suede leather uppers and leather soles and  the Rose Gold/Silver model come with dual layer soft leather uppers and leather soles, while the Red/Cream comes in a synthetic leather lining, fabric uppers and polyurethane soles. It is important to know that the Rose Gold/Silver ones are a very soft leather (and metallic) so they are a bit more delicate, and with all metallic leathers more easily scuffed. Even with the heel height, they are incredibly comfortable for all types of dances. I even wore these for a whole night of St Louis Shag and felt great.

The Seneca using our A sizing, and fits a bit wider in the toe box than many other common models, with the ability to still tighten the ankle strap as needed and snug on the heel cup. The sizing is most similar to Saint Savoy’s beautiful Grace model, or Remix Vintage Janet, and runs true to size. For example if you typically wear a “womens 38”, order a 38.

Below are some photos of Jenna’s photo in the size 38, and some measurements of the inside. Additionally, the uppers of the vegan model and our first drawing. 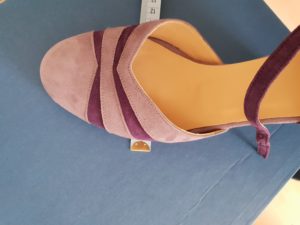 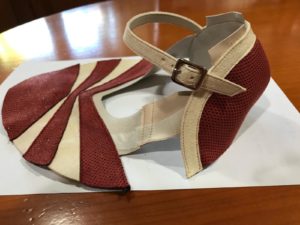 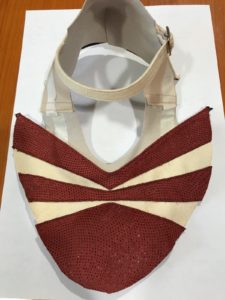 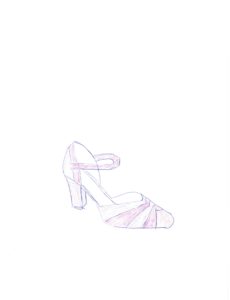